All Around Camping
178 Views

The MSR SweetWater Purifier Water Filter System is a hand pumped water filtration system that filters and purifies drinking water from backcountry water sources. Even though crystal clear flowing streams and lakes may appear clean lurking within them may be microscopic parasites invisible to the naked eye. The SweetWater filter is designed to remove harmful microbes such as bacteria, viruses, and protozoa from any water source and provide clean drinkable water to keep outdoor enthusiasts hydrated and safe during backcountry excursions. With safety and efficiency in mind the filters pumping system provides a distinct mechanical pumping advantage and quickly unhinges for compact storage.

Providing safe, clean drinking water on backcountry excursions is paramount to any backpacker’s trip. When used correctly the MSR SweetWater Purifier Water Filtration System protects against harmful microbes that would otherwise cause an enjoyable trip in the wilderness to be ruined by sickness. I have used the SweetWater System myself on several hiking trips and have never been sickened by fouled water. However, there are a few design flaws which do limit its use. Explained below are some the limitations and concerns to be taken into account when considering this filtration system.

The overwhelming majority of consumers who purchased and field tested the MSR SweetWater Purifier Water Filter system gave it a positive reviews. Most user users gave it the highest rating possible and remarked how they would recommend to system to others. It was often glorified for its ease of functionality and ability to keep them safe from illness causing microbes in backcountry water supplies.

Its lightweight design compared to other filtration systems was a contributing factor for making it a key piece of backpacking equipment. Users also commented on its compact design and ease of assembly with few parts needed to be assembled and reassembled for use. The only major complaint repeated was the handle’s less than robust construction which lead to it breaking for a couple of users. Though the manufacturer was responsive and replaced the unit each time.

Due to its low base price and replacement filter cost the SweetWater Filtration system is a bargain. With relatively few negatives it provides safe dependable drinking water for the intrepid wilderness adventurer. 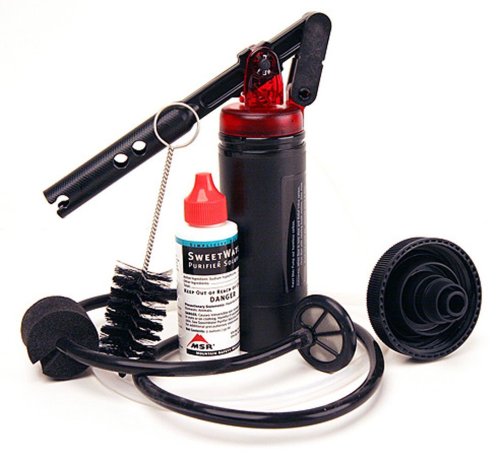 Tables
About All Around Camping
AllAroundCamping.com is a participant in the Amazon Services LLC Associates Program, an affiliate advertising program designed to provide a means for websites to earn advertising fees by advertising and linking to amazon.com, endless.com, MYHABIT.com, SmallParts.com, AmazonWireless.com or any other website that may be affiliated with the Amazon Services LLC Associates Program.